Our Guarantee To You

Our products are produced in small batches and by local hands. While we strive for perfection, sometimes those hands make mistakes. If you are ever unsatisfied with one of our products please let us know since we can’t fix things if we don’t know they’re broken. We would like the opportunity to replace your item and refund your original purchase price. We also like coming up with some oddball items and want you to feel comfortable trying new things, so if you simply don’t like an item we’ve made, we’ll happily refund your purchase and replace it with another item of equal value.

At Small World Food, we use fresh, natural ingredients in everything we make to provide the best tasting, most nourishing food possible. Drawing on both traditional old-world baking and fermentation practices as well as a modern understanding of the science behind them, we work hard to bring out the flavor and nutrition in every item.

Fresh, local produce is naturally fermented and is never pasteurized so it’s full of amazing flavor & live, active, pro-biotic cultures.  And since we source as much as we can from nearby farms, these traditional foods bring the bounty of New York State right to your dining table. 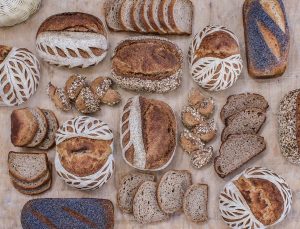 We use ingredients that are grown organically by local farmers, or made by local businesses. Ecologically-grown food is safer and healthier for our bodies, for the farmers, and for the earth. For ingredients that are not produced in the region, we use third-party certification to ensure that their production follows organic and/or fair trade standards.

For our market location and online store, we partner with business within the Upstate NY region. Many of the farms with which we work are certified organic. Others use organic practices, though not certified. No matter what though, you can be assured that every item represented on our website or market table comes from hard working NYS farmers and suppliers that care about sustainability, transparency, and producing high quality food for you, your family, and ours. Because remember: we eat this food every day and would never feed you anything we wouldn’t feed our family.

Sean – Head Baker
Coming from the Tech world, Sean is our newest member at Small World. Sean found a passion for baking in his “downtime”. So between lines of code, he began developing his own sourdough and pastry recipes. Sean brings this self-taught talent to our kitchen every week by producing handmade baked goods using both Small World recipes as well as new ones he brings to the table (ours and yours).
James – Lead Fermenter
James started working for Small World in 2015. After being introduced to fermentation on a large scale, he cultivated a love for fermentation as a culinary practice. Whether for flavor, gut health, food preservation, or just as a way to engage with his billions of coworkers in the microbial world, at Small World James is able to enhance the bounties our local farmers offer by immortalizing fresh vegetables in salt and lactic acid. James adheres to traditional recipes as well as taking his own spin on things for new creations.
Robert – Market Manager
Robert became a member of the Small World family in January 2014 as one of the several farms in our farmer cooperative. As the owner of Workin’ in the Dirt farm, Robert’s use of organic practices in pastured poultry production ran in parallel with the values of Small World. Over the years, Robert’s role evolved and in December of 2018, he took over running the market side of Small World. He is also responsible for coordinating with up to 15 different local farms to either fill the market table or provide James with the thousands of pounds of necessary ingredients to fill all those ferment jars. Robert is driven by the connections he gets to make between the farmers and the customers he meets.
Luke – Founder, Landlord, and Consultant
Luke founded Small World Food in his basement, developing bread and cookie recipes to be brought to the Rochester Public Market back in 2007. Since then, Small World has had many owners, employees, farmers, interns, and volunteers come and go, but one constant influence remains: Luke. Luke took a backseat years ago and now, as the owner of The Refinery, the building that hosts our production space, he has new projects every day keeping him busy. That doesn’t seem to stop him from poking his head in to discuss the gluten chain development in our sourdough or the possibility of new ferments based on what seasonal bounty our farmers provide… or just to grab a cookie fresh out of the oven.

Now Hiring For All Positions!